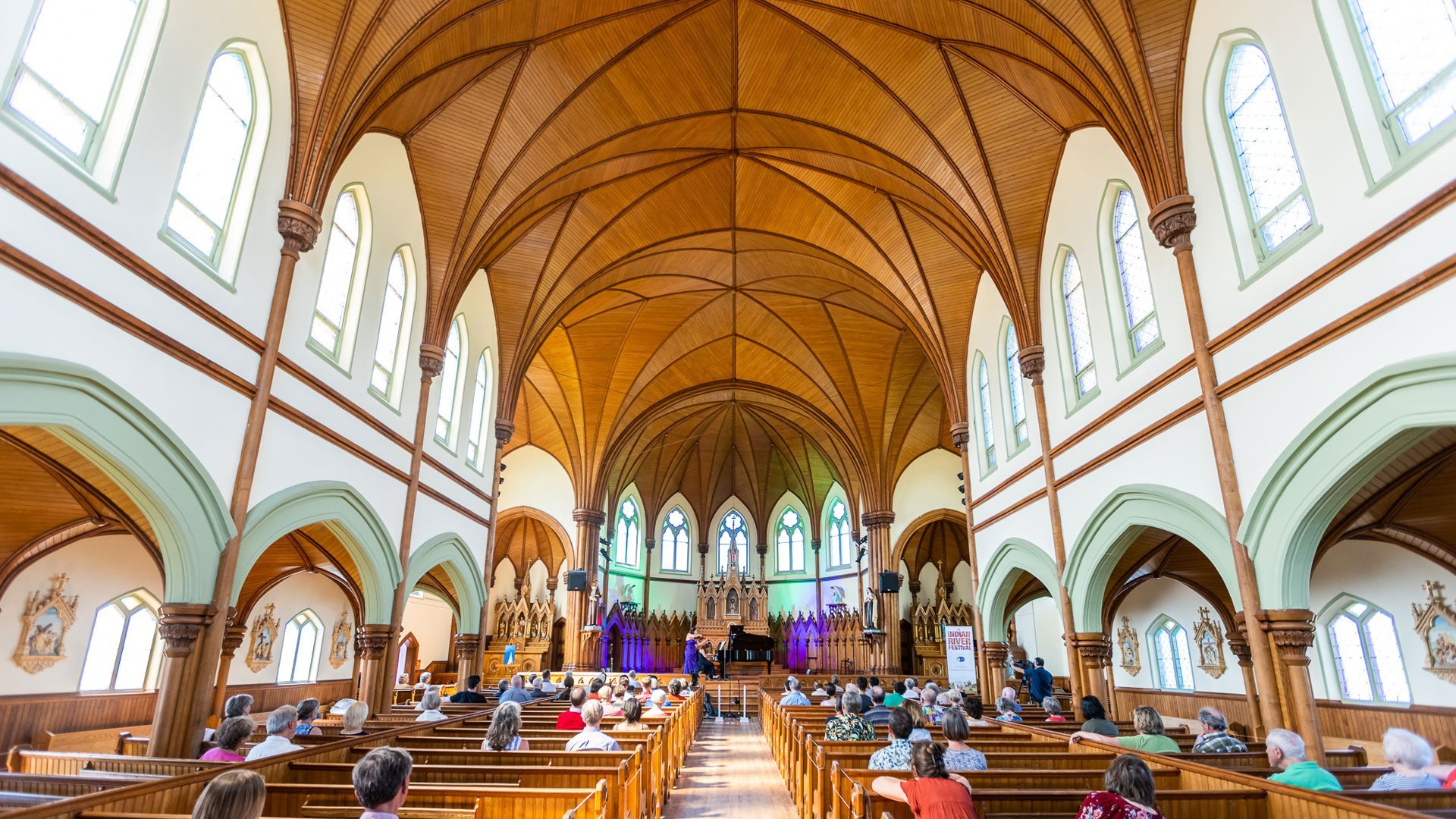 Under the Spire Music Festival, formerly known as the Indian River Festival Association

In the 1970’s and ’80’s, the Historic St. Mary’s, now home to Under the Spire Music Festival, was in serious disrepair. At that time, suggestions were made to tear down the church as the parish alone could not afford to undertake the expensive renovations. Instead, the “Save St. Mary’s” campaign was launched in 1987. Due to an overwhelming response from area churches, businesses, individuals, families and other groups, the necessary renovations were paid for and completed within 3 years. One of the campaign initiatives was the “Sundays in the Summer” concert series proved to be extremely popular and a secure source of revenue; however, the volunteer core behind the series became stretched to its capacity. In order to evolve to the next level, a dedicated focus was required to become a separate entity and permanent event.

Consequently, in 1996 the Indian River Festival Association Inc. was formed as an incorporated, non-profit body for the presentation of fine music, and to aid in the continuing upkeep and restoration of Historic St. Mary’s. In 2009, Historic St. Mary’s was deconsecrated by the Roman Catholic Diocese and subsequently purchased in 2010 by the Association. In July of 2012, the church became a designated heritage place in recognition of its cultural and historical significance to Prince Edward Island. Together, the Association and the Friends of St. Mary’s work in partnership to support the restoration and preservation of this historic building.

Since incorporation, the Festival has been bringing the very best in classical, traditional, folk, jazz and world music to Historic St. Mary’s. An annual destination event for tourists and locals alike, it continues to facilitate restoration projects to preserve this beloved venue while maintaining a busy concert schedule from June-September each year.

Announced in 2021, the Indian River Festival Board of Directors decided to embark on a brand refresh, including updates to the organization’s logo, marketing, and the Festival name. The decision to change the Festival name was approached with much thought and care, and included consultation with stakeholders, audience members, artists, and the local community. From this work emerged three primary reasons for a new Festival name: the former name does not clearly indicate that we are a music festival; it does not reference or connect to the organization’s mandate, which is to present quality music to highlight the unparalleled acoustics of Historic St. Mary’s while helping restore and preserve this beautiful venue; and after 25 years, the organization feels the current name does not reflect an awareness or respect for different cultures. Our hope is that longtime and new concertgoers, the surrounding community, all Islanders, and other visitors to this magnificent space feel welcomed.

Dean Perry, Festival board member and chair of the Rebranding Committee, spoke about the process. “When artists sing, play and speak, we should listen. Maybe artists are spies who see when it’s time for change before the rest of us. They nudged us to look at our beloved festival, with its magnificent historic venue and glorious acoustics—how are we to steward it into the future? With consultation from artists, board members, volunteers, stakeholders, patrons, and the local community, all under the guidance of a brand strategist, writer and graphic designer, we explored every aspect of the festival. We brainstormed, discussed, debated, disagreed. But we uncovered the true heart of the festival and unanimously agreed on a wonderful new name and look. What a productive and exhilarating process it was!” Read more about the process here.

Over its 26 year history, the Festival has received many accolades including several Music PEI Awards for Livestream of the Year (2022) Achievement in Classical Music (2019,2018), the Kensington and Area Chamber of Commerce Community Impact Award (2022), several ECMA nominations for event and venue of the year, twice named in the Globe and Mail as one of the best small summer classical music festivals in Canada, and was listed as one of the top summer classical music festival’s in Canada by CBC Music.

Interested in becoming a member? The Festival has formalized the fee for annual IRF membership. All patrons who have donated $100 or more in the 12 months preceding an AGM qualify for membership and are eligible to vote at an AGM.
If you wish to become a member before the upcoming AGM, you can find our donation link here.