Writing the Story of St. Mary’s: Bertha Campbell on her Upcoming Book

Walking through Historic St. Mary’s is like flipping through a storybook: each page a pillar, beam, or board that holds together the beauty of the heritage building. Despite this story-like quality, and despite having over 120 years of history built into its vaulted ceilings and hand-carved pews, Historic St. Mary’s has never been the subject of any full-length text: until now. Enter Bertha Campbell: an amateur history buff, Indian River native, and author of the soon to be published Historic St. Mary’s: A Brief Account of Three Indian River Churches 1814-2020.

Like many of us, Bertha spent a large portion of 2020 trying to successfully beat the lockdown blues. To fend off boredom, a pandemic project was born: compiling stories about Historic St. Mary’s, once the church Bertha had attended as a child, and now a designated heritage site. Historic St. Mary’s traces the history of Indian River’s first church from its beginnings as a primitive building near the shores of Malpeque Bay, all the way up to the present: a magnificent, acoustically-unparalleled architectural achievement that houses the internationally-renowned Indian River Festival.

Way back in 1843, a second church was erected in Indian River on the current site of St. Mary’s. In 1896, 53 years later, lightning would strike and completely destroy the church while Father Daniel Jerome Gillis watched helplessly from the verandah of the parish house. Only the statue of the Blessed Virgin was saved, which can still be seen inside the current church to this very day. Undaunted by the church’s destruction, the locals came together under the direction of Father Gillis and work began in October, 1900 to build the current St. Mary’s we all know and love. William Critchlow Harris, who was already well-known for his work throughout Eastern Canada, took on the role of architect. Father Gillis directed Harris to “build it like Kinkora’s church only bigger and better!” (Harris, as it happens, also designed St. Malachy’s Roman Catholic Church in Kinkora).

An amateur musician, Harris was intimately concerned with the acoustic capabilities of this new church he was designing. He soon dreamt up an idea that would combine his love of music and architecture, as well as revolutionize venue acoustics to this day: what if the inside of a church could operate like the inside of musical instruments? In other words, Harris hatched a plan to manipulate the materials and space in his church design in a way that would provide spectacular acoustic effects with a minimum amount of echo. 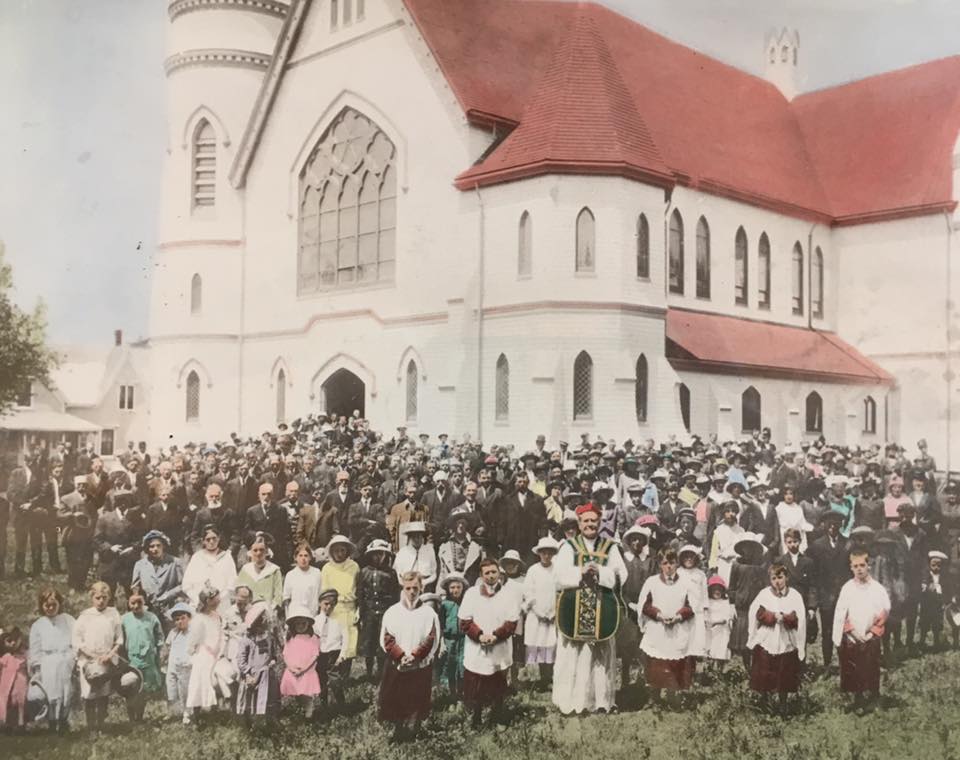 In 1902, about 120 years ago, an official blessing and opening ceremony for St. Mary’s was held. Fans of Indian River Festival, or Island history buffs, may recognize this photo of the church’s early congregation. The snapshot was originally taken in black-and-white film with the colour digitally re-added later on. An interesting fact that Bertha uncovered was “the Church wasn’t originally white. It actually started out as a sort of reddish-brown ocher colour with grey trim, and it was repainted some years later. When they were doing renovations on the church, the contractors noticed coloured paint underneath the coats of white paint.” Bertha was surprised to find that some people were shocked by the idea that the church hadn’t always been its trademark white.

More than just a list of facts and figures, Historic St. Mary’s: A Brief Account of Three Indian River Churches 1814-2020 weaves a narrative of the church and its patrons, uncovering the stories that hide in every nook and cranny of the heritage building. “I wanted to tell the story of St. Mary’s, not just the history” says Bertha, who spent as much time talking to locals as she did digging through archives. Her book relies on some of the oral history of Indian River’s inhabitants, many of which are childhood friends and family, as well as her own memories of the building.

Having attended St. Mary’s church as a child, Bertha remembers the building before it became home to the Indian River Festival. Back in those days, Mass was only held in the building’s main church during the summer months; in the winter, the parishioners used the cozy vestry to the left of the entrance as it was the only section of the church with heat. Eventually, holding Mass in the vestry became impractical, and church goers went to Kensington for the winter services.

Fast forward to the 1970s and 80s, and St. Mary’s began to fall into disrepair. At that time, suggestions were made to tear down the church as the parish alone could not afford to undertake the expensive renovations. Around the time of these discussions, in 1980, our author got married at the very subject of her book. “The church was showing some wear at the time, but still very beautiful—an amazing venue for a wedding,” says Bertha. And others seemed to see the same value in St. Mary’s that Bertha did, for the “Save St. Mary’s” campaign was launched soon after in 1987. Due to an overwhelming response from area churches, businesses, individuals, families and other groups, the necessary renovations were paid for and completed within three years.

Part of the “Save St. Mary’s” campaign featured a fundraiser concert, a small one-off event to raise money for the church. From that concert, the Indian River Festival was born. In 1996 the Indian River Festival Association Inc. was formed as an incorporated, non-profit body for the presentation of fine music, and to aid in the continuing upkeep and restoration of Historic St. Mary’s.

Historic St. Mary’s isn’t Bertha’s first foray into Island history. Five years ago, she published a book tracing the history of her grandmother who lived on PEI her whole life from 1896-1989, and spoke solely Gaelic until she started school. “My grandmother’s mother died when my grandmother and her siblings were very young and thus my grandmother was raised by elderly grandparents who spoke only Gaelic.” While she pulls from her ancestors for her books’ content, it’s her children that help with the nuts-and-bolts of publishing. “My daughter has been incredibly helpful when it comes to editing and formatting.”

The hardest part, for Bertha, hasn’t been compiling information, but knowing when to stop. “There are so many great stories connected to St. Mary’s. Not just the big stories about the church’s construction and saving it from demolition; but littles anecdotes about wine disappearing, a priest who loved racing horses, or old wives tales that may have an inkling of truth. It’s been hard to know how many of those stories to add.”

Historic St. Mary’s: A Brief Account of Three Indian River Churches 1814-2020 has a tentative release date of May 2021. We’d love to spend pages recounting Bertha’s tales about our beloved venue—but you’ll just have to wait to read them in the book.